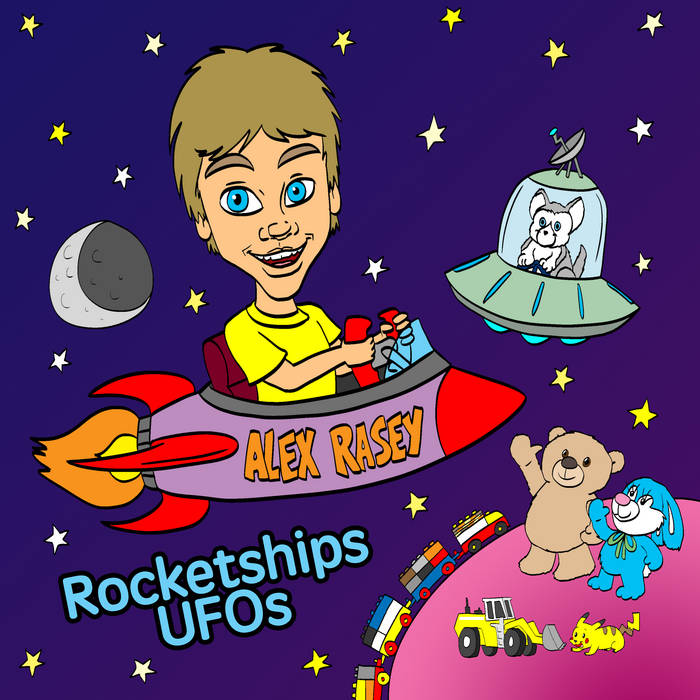 Alex Rasey, the 4-and-a-half-year-old son of comedy musician Carrie Dahlby said to his mommy one day, 'I want to put out a CD when I grow up'. Carrie told him, 'You don't have to be a grown-up to put out a CD!' And upon hearing that, Alex said he wanted to release a CD of his very own songs for his family and friends to hear. Mommy called Luke Ski, who recorded Alex singing all of his songs. Then they hired Jace McClain of Nuclear Bubble Wrap to set it all to music. The result is 21 songs in under 10 minutes that is sure to warp your mind a put a smile on your face. Bonus tracks include a 5 minute interview with Alex conducted by Carrie, and her 2 previous songs featuring vocal appearances by Alex, "Song For Baby Alex" and "Rainbow Train". We hope you all find this album as whimsical and fun as we do!

All of the Alex songs are by Alex Rasey except for "Alex And His Friends" which is by Carrie Dahlby. Parodies include "Thomas and his Friends theme song", the Wizard of Oz Witch's Castle song, "Wiggy Wiggy Wiggles", "I like to eat Apples and Bananas" and "Farmer in the Dell".

Alex and Carrie would like to thank Josh Rasey and Luke Ski for their love and unwavering support.

Featured sounds from Fly Lo and Ahmed Idris, plus Mother Nature hops on to drop off new project